A complete connection path requires a mating receptacle for the pin to engage, which is termed a target or land. A pogo target consists of a flat or concave metal surface, which unlike the pins, has no moving parts. Targets may be separate components in the complete connector assembly, or in the case of printed circuit boards, simply a plated area of the board.

Spring-loaded pins are precision parts fabricated with a turning and spinning process which does not require a mold, thus allowing the production of smaller quantities at a lower cost.The name pogo pin comes from the pin's resemblance to a pogo stick – the integrated helical spring in the pin applies a constant normal force against the back of the mating receptacle or contact plate, counteracting any unwanted movement which might otherwise cause an intermittent connection. This helical spring makes pogo pins unique, since most other types of pin mechanisms use a cantilever spring or expansion sleeve

Pogo Pin is spring loaded probe which is made by precision instruments with riveting workmanship. It usually consists of plunger, tube and spring. Pogo pin is generally applied in the precision connection inside the electronics products such as mobile phones, communication devices, automotive, medical devices, aerospace devices and so on. Since pogo pin is very fine probe, it can make the finished connector light in weight, small in size and exquisite in look when it’s applied in a precision connector.

- Available 2A per pin

With ball structure: The ball inside allows more buffer, so result in a even more reliable connection.

Bias structure: The biased tail of the plunger creates a lateral force, so further improves the contact.

Back drill structure: The back drilled plunger increases the space for the spring, so allows a shorter pogo pin for tight space. 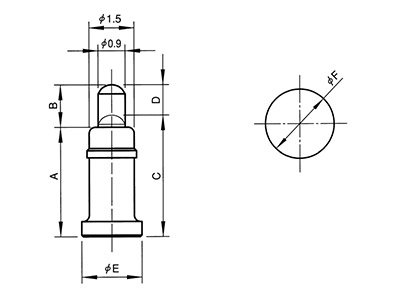