Pancreatic or tissue Carboxypeptidase B (CPB), a key enzyme involved in insulin conversion and highly specific for excising C-terminal Lys and Arg residues from peptides and proteins, was expressed at high level and purified from a recombinant Pichia pastoris strain. A cDNA containing the porcine pancreatic pro-Carboxypeptidase B (proCPB) fused to the Saccharomyces cerevisiae alpha factor secretion signal was cloned into the pPIC3K vector under control of P. pastoris AOX1 promoter. After 72 h of growth on methanol, procarboxypeptidase B accumulated until 320 mg L−1, representing 70% of total proteins in culture supernatant. A single stepwise ion exchange purification process with Q-Sepharose at increasing concentrations of ammonium acetate allowed recovery of 65% procarboxypeptidase B in a single fraction. Recombinant Carboxypeptidase B is expressed in E.Coli and purified by high pressure liquid chromatography. There is no trace of other enzyme (such as carboxypeptidase A and chymotrypsin) activity. No protease inhibitors such as PMSF are present in the preparation.

Animal origin free:YaxinBio recombinant carboxypeptidase B belongs to the AOF level 3, eliminate the risk of virus presence, or any other potential adventitious agents found in animal-derived carboxypeptitase B

Stability:A sterile recombinant carboxypeptidase B lyophilized eliminates the risk of contamination and decreases the chances of activity loss in the process of transport and storage.

2) No other contaminating proteases such as chymotrypsin and carboxypeptidase A.

3)Less than 10ppm of recombinant trypsin.

Centrifuge the vial prior to opening. Reconstitute in water to a concentration of 0.1-1.0 mg/mL. Do not vortex. This solution can be stored at 2-8°C for up to 1 week. For extended storage, it is recommended to further dilute in a buffer containing a carrier protein (example 0.1% BSA) and store in working aliquots at -20°C to -80°C. 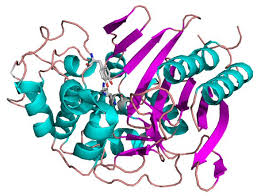 YaxinBio insists on “scientific and technological innovation”,has developed with independent intellectual property rights of the products.YaxinBio obtained the support of Chinese ministry of science and technology and Shanghai innovation fund project in 2010; Recombinant trypsin,recombinant carboxypeptidase B and recombinant protein A won the Shanghai high-tech achievement transformation project in Sep.2013.