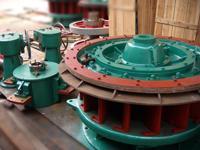 The Kaplan turbine is an inward flow reaction turbine, which means that the working fluid changes pressure as it moves through the turbine and gives up its energy. Power is recovered from both the hydrostatic head and from the kinetic energy of the flowing water. The design combines features of radial and axial turbines. Its main parts usually include Blades, hub, main shaft, runner cone, rotating mechanism.

Kaplan turbines are now widely used throughout the world in high-flow, low-head power production. The Kaplan turbine was an evolution of the Francis turbine. Its invention allowed efficient power production in low-head applications that was not possible with Francis turbines.
According to whether the runner blade is movable or not in operation, it is divided into two categories: axial movable-blade type and axial fixed-blade type.

The blades of axial fixed-blade turbine are fixed on runner hub. The place angle of blades cannot be changed in operation. As its efficiency curve is relatively steep, it is suitable for small load change or the station to adjust the running amount of the units in order to adapt to the load variation. It has the advantages of simple structure and low cost, while the disadvantage is that its efficiency will decline sharply when deviating from the design condition. According to its characteristics, the axial fixed-blade turbine is commonly used in the hydropower station with small output, low water head and small head variations. The axial fixed-blade turbine has larger flow capacity and the improved cavitation performance than axial movable-blade turbine, but it cannot meet the requirements of the hydropower stations whose head and load change is too big. Its specific ratio speeds are 250~700 and applicable heads are 3~50m.
Axial movable-blade turbine is also called Kaplan Turbine, its blades is usually operated by the oil pressure relay installed in the runner hug and can be turned according to head and load changes in order to keep the optimal coordination between the activity of the guide vane angle and the blade angle to enhance average efficiency. The maximum efficiency of this kind of turbine have been more than 94%. Its has the advantages of small size and light weight, while the disadvantage is easily limited flow capacity when available head increases, large cavitation coefficient, complicated structure, high cost. The axial movable-blade turbine is commonly used in the large and medium-sized hydropower station with output and head vary widely. Its specific speed is up to 200~850, which applies to the station of low head (3~80m) and large load change.