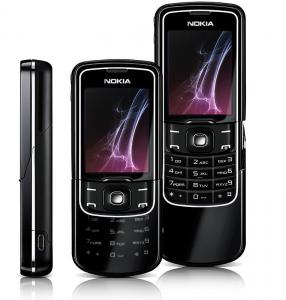 Clearly closely modelled on the Nokia 8800 Sirocco, the 8600 is a stylish slider phone aimed at fashion conscious consumers and executives. Featuring an unusual smoked glass sliding cover, the Nokia 8600 certainly scores well for "wow factor". Other features are a general improvement on the 8800 series, with a 240x320 pixel display, quad-band GSM support for worldwide roaming, and the Nokia 8600 also has a 2 megapixel camera, 128MB of internal memory and an FM radio.

As well as the stylish semitransparent cover, the Nokia 8600 features quite a lot of stainless steel in its construction which brings the weight up to a heft 140 grams while adding significantly to the 8600s structural strength. Despite the weight, the Nokia 8600 isnt a 3G device although it does have 850/900/1800/1900 MHz GSM with GPRS and EDGE. Of course, the Nokia 8600 also has Bluetooth and an MP3 player.

Despite the shortcomings, one thing that the Nokia 8600 will have is common with the original 8800 and later 8800 Sirocco is looks, and the overall design and usability of the 8800 has appealed to many people in the past.

WE HAVE SOLD LOTS OF MOBILE PHONES TO

THE USA, CANADA, AUSTRALIA, ETC. WE HAVE

GOT 100% POSITIVE FEEDBACK. WE ARE VERY